"RALLYING IS MY DREAM, AND I AM LIVING IT.
Believe me, life is amazing when you have a passion like this."

Being one of the youngest performance rally winners in North American rally history, Leo is one of Canada’s top rally drivers. His committed and spectacular driving style, sometimes resulting in "off the cliff" excursions, helped him to earn the nickname 'Crazy Leo'.

In 2014, Leo was the only North and South American driver selected to compete in the World Rally Championship’s high profile 'Drive DMACK Fiesta Trophy'. 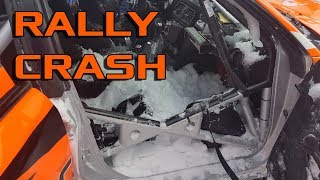 Rally Crash: Keep going!
2017 champions Crazy Leo and co-driver Alex Kihurani roll their rally car into a snowbank, then keep going to win the class and finish 2nd overall in the rac...

At the age of 17, Leo Urlichich enrolls in Trent University in Peterborough, Ontario, where he pursues a Business Administration degree. He first drives competitively while at university, at the local rally cross events in his daily-driven Subaru WRX STi.

2008 Black Bear rally earns Urlichich his first ever performance rally victory. Urlichich and co-driver, Dave Shindle win the event after setting the fastest times on all, but the last stage against the more experienced Peter Thomson (2005 Canadian National Champion) and Andrew Comrie-Picard.

The 2010 season is Urlichich’s first full season in the Canadian Rally Championship (CRC). At Rallye Baie-des-Chaleurs, he delivers his first national podium and finishes second. Urlichich finishes fifth overall in the 2010 CRC.

The 2011 season sees Urlichich team up with an Irish co-driver, Martin Brady. The team competes in eight events across Canada. Urlichich loses Rallye de Charlevoix to Antoine L’Estage and John Buffum (who was co-driving at this event) by one second. At the end of the season, Urlichich and Brady win Rally of the Tall Pines and finish second in the Championship. David Higgins, who finishes second in the event notes that the rally is one of the most difficult in his career due to the nature of stages.

2012 is Urlichich’s inaugural season in the Rally America championship in United States (most events are currently sanctioned by the ‘American Rally Association’). Partnered with an experienced Welsh co-driver, Carl Williamson and the former co-driver for Ford World Rally Team’s driver Jari-Matti Latvala, Urlichich wins a stage at the debut Sno*Drift Rally and finishes the event third (later to be penalized to sixth place due to the substrate of the catalytic converter missing). At the second rally of the year, Urlichich crashes heavily into a telephone pole, but despite serious damage to his car, he is able to finish second overall. The video of the accident becomes the first ever viral video in Canadian rallying, reaching over 1.5 million views on YouTube.

2013: Preparing for the World Rally Championship

Urlichich is absent from full-time competition in 2013, spending time in Europe working on a program to compete in one of the Support Categories of the World Rally Championship (WRC) in 2014.

Urlichich is the only North and South American driver selected to compete in the inaugural Drive DMACK Fiesta Cup season, a WRC racing series with a coveted prize valued at over $1M. Unfortunate mechanical and logistical issues force Urlichich to retire from four of the five events, but the international experience proves to be invaluable for his development as a professional rally driver.

Years earlier, in 2007, Urlichich begins coaching upcoming, as well as established rally drivers. In an effort to support his participation in CRC and WRC events, Leo expands this coaching to include advanced driver training for Canadian Special Forces.

To facilitate these training courses, Urlichich builds up a fleet of cars for students to use during driving exercises. After building up a fleet, Urlichich recognizes the opportunity to bring his unique brand of advanced driver training to the public and therefore establishes Race Lab in 2015.

The first Race Lab events are held in Rockton, ON, starting in late 2015. Off the starting line, it is clear that the Race Lab formula has traction, with very positive feedback on all aspects. From the classroom sessions, to the in-car instruction, and of course, the shotgun laps with Leo, Race Lab is an adrenaline fueled-experience of a lifetime.

Shortly after launching, Race Lab expands beyond Rockton, ON to offer private in-car training sessions, as well as additional public events in Markham, ON in the Fall of 2016. Beyond its public and private coaching, Race Lab continues to secure major military training contracts with the National Department of Defence.

Hi there, welcome to our Quick Guide

Awesome! "The shotgun ride with Crazy Leo" is $199, and it's A TRULY CRAZY EXPERIENCE! And the good news is that it can even be free!

Type in your phone number and we'll call you and explain everything. We guaragree that you'll love this.

Thanks for sending your request!
We'll get back to you shortly.

There was a problem sending your message. Please try again.

Please complete all the fields in the form before sending.

Right on! You should go for the "Intro to Advanced Car Control In Our Car" package, and it starts at unbelivable $99!

Sweet! Your best option is "Arrive and Drive with Crazy Leo" package.

Your best option is "Arrive and Drive" package.

"Basic Lapping" is the package you're looking for. Only 99 bucks!

Your best choice is "Arrive and Drive with Crazy Leo" package.

Your best choice is "Arrive and Drive" package.

Awesome! You should go for the "Intro to Advanced Car Control with Crazy Leo" package, and it's only $149!

Got it! You should go for the "Intro to Advanced Car Control" package, and it's only $99!

Awesome! You should go for the "Intro to Advanced Car Control with Crazy Leo" package, and it's only $149!

Got it! You should go for the "Intro to Advanced Car Control" package, and it's only $99!

"Basic Lapping" is the package you're looking for! Only 99 bucks!

It'll be a blast! You're gonna go for "Unlimited Lapping with Crazy Leo".

Roger that! You're gonna go for "Unlimited Lapping".

All right! You should go for the "Unlimited Lapping with Crazy Leo".

Roger that! You should go for the "Unlimited Lapping".

See this package for more details
Just call me and explain how this works.
Schedule
Do NOT show this Quick Guide for a while
Close Back

Request a Call Back